The Vincristine/Cytoxan protocol is the current version of the original “COP” protocol that was a favorite Canine Lymphoma treatment protocol prior to the development of the full Madison Wisconsin Protocol. “COP” stands for “Cytoxan, Oncovin (the original brand name for Vincristine) and Prednisone“.

As you might expect, this treatment protocol combines the chemotherapy drugs used in its name – Vincristine and Cytoxan, along with Prednisone given at various times during the course of this protocol

While this treatment protocol is somewhat less expensive than the full Madison Wisconsin Protocol treatment, it also tends to be less effective in terms of results.

What you need to know about Vincristine and Cytoxan

Vincristine is given intravenously, therefore it will be necessary to visit your vet’s office for your dog to receive these treatments.

Cytoxan, however, is an oral chemotherapy drug that can be given by the caregiver at home in certain cases.

The trouble with this treatment protocol, on the other hand, is that by combining only two types of chemotherapy treatments (compared to the 3 types included in the full Madison Wisconsin Protocol), Canine Lymphoma’s resistance to certain treatments (and adaptation over time) leads to a lesser successful response rate (both in terms of the odds of your dog going into remission and the expected length of that remission should it occur) compared to other multi-drug combination protocols such as the Madison Wisconsin Protocol. 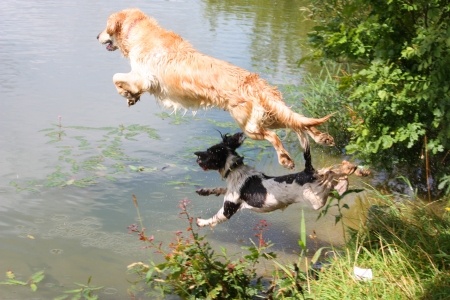 Although costs may vary significantly from vet to vet and in different parts of the country, for patients generally treated by Dr. Freeman, the average costs of this Vincristine/Cytoxan treatment is about 300- 500 per month for the full course of the first round of treatment* (compared to $5,000 to $7,000 for dogs who undertake the full Madison Wisconsin Protocol treatments). It’s difficult to predict the total cost, due to the variable responses and duration of therapy. The average response duration is about 6 months, so cost may range from $1,800- $3,000.

*Note: These quoted cost estimates assume that this is the only treatment used, that there are no unexpected complications that must be dealt with, and that only one round of treatments is given – for example to bring the patient dog through the first round of remission only. Of course, to the extent that additional treatments (such as holistic care and supplements) are used in combination with this treatment, or if complications occur, etc., this cost will increase. And similarly, once a dog falls out of remission to the extent that this treatment protocol in repeated (or another one tried in its place) the costs can go up significantly as well.

**Note: When estimating the percentage of dogs who might go into remission using this type of treatment (and the average length of remission), we assume that these treatments are being given to dogs who have been diagnosed with the most responsive types of Canine Lymphoma – i.e., Stage I, Stage II, Stage III, or Stage IV, B-Cell Lymphoma, showing no visible symptoms of the disease (substage a). Fortunately this “most responsive” category applies to the vast majority of all diagnosed Canine Lymphoma cases. However, to the extent that these treatments are given to dogs who are diagnosed with “T-Cell Lymphoma,” or Stage 5, or who are showing unhealthy symptoms of sickness (Substage b), the effectiveness of this treatment (and of all known Canine Lymphoma treatments) may diminish significantly, both in terms of the percentage of dogs who achieve remission and in the length of remission once achieved.

Although this Vincristine/Cytoxan protocol can be an effective treatment option for Canine Lymphoma it is generally NOT the best treatment protocol available in terms of chance of remission and length of remission once achieved.

The primary reasons why caregivers may choose this option over other more effective options is cost (this option is less expensive than the preferred full Madison Wisconsin Protocol).

However, in virtually every case, where finances allow, Dr. Freeman generally recommends that her patients undertake the more comprehensive Madison Wisconsin Protocol over this Vincristine/Cytoxan protocol as a treatment option.